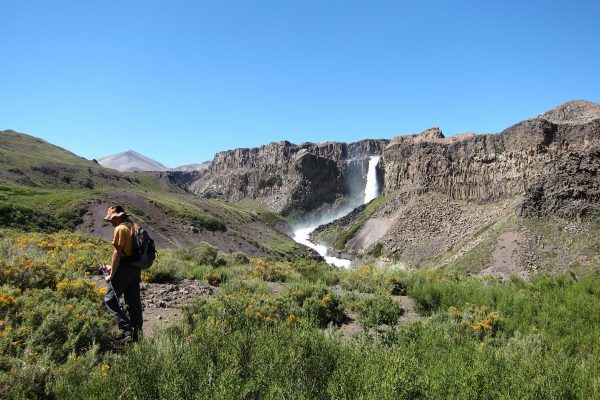 Rising before dawn has its merits. In under two hours we had parked not far from the Argentine border and were high up in the Andes beginning our trek along the Maule River in the cool of morning. Above the tree line in a barren basalt landscape, the unusual spikey rock outcroppings have names likening them to ‘Muela de Diabolo’ the ‘Devil’s Molar’. Widely varying colours in the rocky landscape, reveal the degrees of heat and composition of volcanic origin.  Tufts of pampas grass cover the ground and little surprises of vibrant purple, yellows, oranges, pinks come from the wildflowers surviving in this dry antipodean mid-summer. 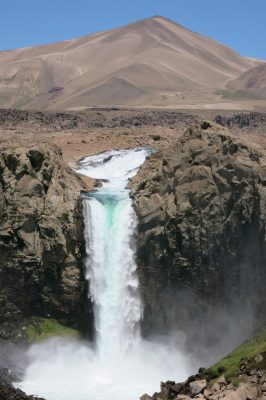 As the day heats up we’re cooled by the sound of the rushing Maule at our side as we snake ever higher along the path to find the ‘hidden waterfall‘  promised in the description on Frank’s website. Transplanted from a small village in Germany, our guide Frank is married to a Chilean and has established his popular trekking company in Talca (40 minutes from Fundo Meza). As it turns out there are several hidden waterfalls – some so huge their thunder reaches you before their clear turquoise and white froth registers. One of the beauties of this once molten basalt landscape is that it gives off no sediment and the waters run so clear.

By mid-day we reached the base of a most spectacular waterfall and Frank set out our picnic lunch amongst some large boulders.  The six trekkers enjoyed our break in front of this magnificent wall of water, listening to Frank’s tales of watching young Condors learning to fly from the top of the waterfall, being coaxed and overseen by their parents—who we suppose were ready to swoop and catch their fledglings if they faltered. 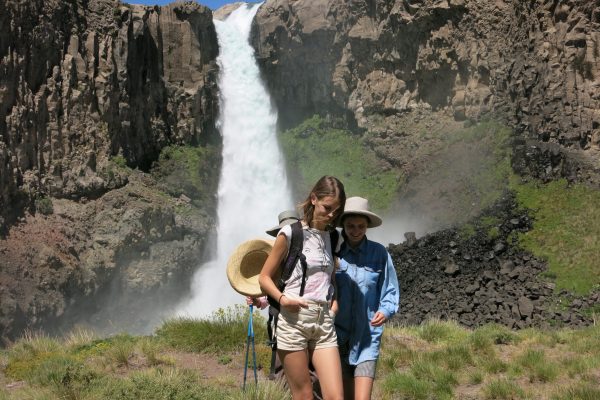 Our next stop is at the top of a cascada where we can cool off in the small pool that swirls around before sending its water over the edge. Not as dangerous as it sounds! We finished our hike traversing over a field of basalt back to the van. Our route home was back down the newly completed (two months) Paso Pehuenche, that crosses over the Andes between Chile and Argentina from Talca.